Three major charities, Sarcoma UK, Alzheimer Scotland and Scottish War Blinded have shared gifts totalling £8000 from the Association, drawing on funds raised during a charity auction at the 2014 conference and dinner.

“The auction is a long-standing feature of our annual dinner, with members and guests at this year’s event coming together to enable us to make a contribution to the important work being carried out by these three excellent charities,” said SAMW president, Alan McNaughton. 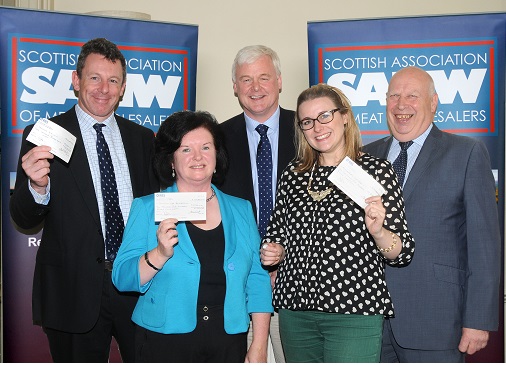 Sarcomas are rare cancers, most commonly developing in muscles and bones, although there are around 100 different types. There are currently around 13,000 people living with sarcoma in the UK, with 3,800 new cases emerging every year.

“The overall five-year survival rate is roughly 55%, much lower than for other types of cancer, but would be greatly improved with earlier reporting and diagnosis,” said Sam Patton, Consultant Orthopaedic Surgeon at Edinburgh’s New Royal Infirmary, who received the SAMW cheque on behalf of the charity.

“While breast cancers are now identified, on average, when they’re the size of a grape, sarcomas tend not to reach the medical profession until they’re the size of a baked bean tin. If we could see them before they reach golf ball size we could improve survival rates by 20%. Gifts such as this from SAMW will help greatly in getting this message out to people and in our research work.”

Alzheimer Scotland depend on gift income to maintain and develop their work and services to help improve the quality of life for the 88,000 people in Scotland living with dementia.

“The funds raised by SAMW will go some way towards helping us make sure that no one goes through dementia on their own, by supporting our Dementia Advisors Programme,” said Claire Turner, Trusts and Corporate Fundraising Manager, Alzheimer Scotland. “These dementia specialists work in local communities throughout Scotland, offering one-to-one, personalised care and support for people with dementia, helping them to maintain independence, plan for the future and live well with dementia.”

The Linburn Centre, located in Wilkieston, West Lothian accommodates up to 35 members a day who can attend Monday to Friday for a range of activities, rehabilitation, independent living skills and social outings.