Five major charities shared a total of £13,000 in gift support from the Scottish Association of Meat Wholesalers (SAMW).

The funds were raised during a charity auction at the Association’s 2015 conference and dinner and were presented to representatives of the organisations by SAMW president, Alan McNaughton, and executive manager, Ian Anderson.

“We’re delighted to have been able to distribute a record amount to these extremely valuable charities as a result of the generous contributions made by association members and guests,” said Mr McNaughton.

“In each case, the work being done by these charities, often driven by hard-working volunteers, is crucial to the health and well-being of people throughout Scotland and we’re grateful to be able to play a small part in this.” 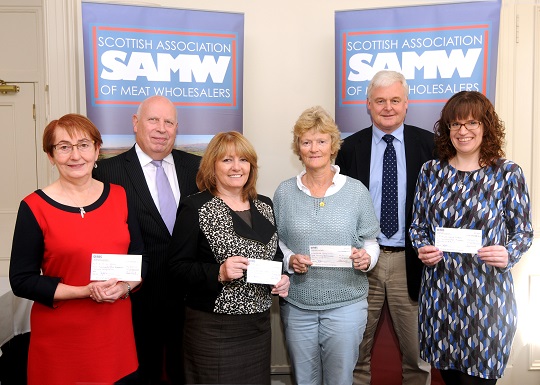 Quarriers is one of Scotland’s largest social care charities, providing practical care and support for vulnerable children, adults and families who face extremely challenging circumstances. Operating from its headquarters at Quarriers Village, Bridge of Weir, Renfrewshire, the charity “challenges poverty and inequality of opportunity to bring about positive changes in people’s lives”.

The charity operates throughout Scotland, offering “quality services to transform lives every day”. This includes providing services for adults with a disability, families and children, people with epilepsy and young adults, particularly those who are homeless.

Using funds raised during the 2014 Ryder Cup, for example, Quarriers is now able to offer a “coaching for life” training programme for homeless young adults to help them retake control of their life, getting a foothold on the housing and employment ladder.

Founded 14 years ago by a family after the loss in an accident of their young son and nephew, the aim of the Sandpiper Trust is to help save lives in Scotland. They do this by improving immediate care especially in the remote and rural areas, through the provision of appropriate standardised and uniform medical equipment, known as Sandpiper Bags, for use by specially trained GPs, community nurses, paramedics and A&E Consultants, all of whom operate on a voluntary basis. There are currently 910 Sandpiper bags in use in Scotland and last year volunteers were called to over 3,000 emergencies in the North of Scotland alone. Later this year the Sandpiper Trust will start their most ambitious project to date with Sandpiper Wildcat, to reduce deaths from cardiac arrest in North East Scotland. They will recruit, train and equip 400 volunteer cardiac responders across the North East of Scotland to save at least 50 lives a year from cardiac arrest.

Macmillan Cancer Support believes that no one should face cancer alone. “So when you need someone to turn to, we’re here,” they say. “Right from the moment you’re diagnosed, through your treatment and beyond, we’re a constant source of support, giving you the energy and inspiration to help you take back control of your life.”

Last year, the charity’s supporters raised £215.2 million for Macmillan, 15% more than the year before. Over 98% of the charity’s income comes from voluntary sources, however, so this “amazing support” is absolutely vital.

TCCL has been supporting Tayside, Angus, Perthshire and North East Fife families, affected by childhood cancer and leukaemia, since the mid-1990s.

Driven by a group of dedicated parents and other volunteers, TCCL includes many who have experienced the pain of having a child with cancer and know first-hand the support requirements of a family during diagnosis, treatment, remission and, when treatment isn’t successful, bereavement.

TCCL Lodge, which is the focus of SAMW’s gift, involves the setting up of a holiday house in St Andrews for use by children who have cancer and leukaemia. The house, which has a creation and operating budget of £500,000, is due to open to guests before the end of 2015.

Beatson Cancer Charity is determined to beat cancer and is committed to securing significant funding to support and enhance the treatment, care and wellbeing of current, former and future cancer patients and their families.

Located at the Beatson West of Scotland Cancer Centre in Glasgow, the charity provides a comprehensive range of wellbeing, specialist and complementary therapy services delivered by charity staff and volunteers.

The charity provides funding to various individuals and institutions involved in the care and investigation of cancer, including the NHS. Key areas of funding include specialist staff resources, innovative service developments, enhanced medical equipment, research projects and staff development.