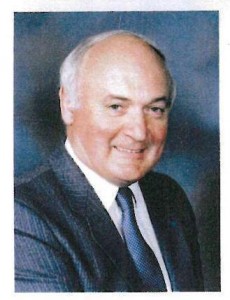 John Scott was born at home at Barr farm, Skelmorlie on 20th April 1934, the second of three children to James and Elspeth Scott. He attended Skelmorlie Primary and Largs High Schools, was an active member of the Boy Scouts and when he left school at 16 he became the sixth generation of Scott’s to farm in Skelmorlie. John was only 22 when his father died and he assumed all of the responsibilities which came with running the farm.

At that time the farm was a small community supporting many people. However agriculture was going through many changes, tractors were taking over from horses, food rationing was coming to an end and electricity was now in regular supply. In his late teens John had already realised that there were opportunities out there and had started to look for ways to make extra money. He decided to buy 100 chickens and looked after them until point of lay, at which point he sold 25 of them which enabled him to buy another 100 chickens and so it was that he very quickly developed a business with an egg run supplying the butchers shops in Greenock, of which at that time there were 35. It was not long before he also began supplying them with cattle and sheep both from his own farm and also local markets. The foundations of John Scott Meat were being built. The supply of meat operated from Greenock abattoir until 1968 when it was destroyed in a storm. John managed to secure other facilities at Dumbarton abattoir and then moved five years later to modern premises at Paisley abattoir, where the Company still operates from to this day. Paisley was very well located for business. In 1978 when the local council decided that the abattoir was no longer viable for them to operate John and two others seized the opportunity to take over the business from the local council and Sandyford Abattoir (Paisley) Ltd was formed with John Scott as Chairman.

The early years were tough and the improvements and progress made at home on the farm are a tremendous legacy to the man John Scott was. He married Elsie Mitchell in 1959 and moved into Thirdpart Farm. Two daughters Hazel and then Gillian were born a few years later, followed by a son Jamie in 1967. He enjoyed holidays abroad, in the early days with the family and then Elsie and he enjoyed farm study tours and exploring different parts of the world. He was a great family man and the greatest blow to him was the loss of his daughter Gillian to cancer in 2005.

In his public life he was a staunch supporter of the Scottish Meat Industry particularly smaller operators and contributed significantly to various issues of the day …..all vital at the time. He made a sound contribution to the Guild of Scotch Quality Meat Suppliers (GSQMS) which was the precursor of all the quality assurance schemes set up in Scotland. As such it had a prolonged gestation and John helped nurse it through the early days to eventual success at a time when clearly defined abattoir standards became a vitally important part of promoting the Scotch Label. Perhaps his greatest contribution was as SAMW President. In 1993 he took over as President from Alan Stevenson who then became Executive Manager of SAMW and together they developed SAMW into a very effective lobbying force in the corridors of power and to this day it is punching well above its weight in Scotland, London and Brussels. The combination of John’s experience with smaller abattoirs and Alan’s which lay with larger organisations smoothed the path for establishing SAMW and making it  a force to be reckoned with in dealing with the very difficult problems of the 90’s. BSE, FMD and legislation.

Although John handed over the reigns of John Scott Meat to Hazel and Jamie in 2007, he always maintained an interest in the meat industry and up until last year he was still a familiar face around the livestock ring. Laterally he was happiest at home on the farm where he had overseen many improvements to the land and enjoyed nothing more than checking the livestock.

He was a well respected man and the large turnout at his funeral at Skelmorlie and Wemyss Bay Parish Church which was filled to capacity was a great testament to the high regard in which he was held.

He is survived by his wife of 57 years Elsie, daughter Hazel, son Jamie and his grandchildren John, Scott, Nicola, Jason and James.