Martin Morgan, former head of livestock policy for the Scottish Government, has been appointed as SAMW’s new Executive Manager, replacing Ian Anderson who is retiring after 10 years in the post. 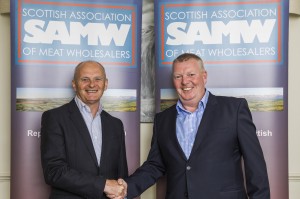 Having joined the Scottish Office in 1977, Martin comes to SAMW with extensive experience of red meat issues, including working on meat hygiene legislation in 1992, the BSE crisis from 1996 onwards and being part of the team involved in handling the UK’s foot and mouth outbreaks in 2001 & 2007.

“It was during that demanding period for the industry that I worked with Ian in the Scottish Government,” said Martin, who takes up his new post of November 1 st. “I’ve had a strong attachment to the red meat industry for more than 25 years and am delighted to be joining SAMW with the challenge of carrying on the good work that Ian has done.”

SAMW president, Frank Clark, agreed: “Ian has been extremely important to the association throughout his time as our executive manager, helping us negotiate many issues and developments over the last decade.

“In welcoming Martin, we believe we have another excellent executive manager who understands the red meat industry in Scotland with all its demands and also its great potential. With Brexit on the horizon, I am sure Martin will have a key role to play in helping our members address the challenges and opportunities which lie ahead.”

Martin and Ian will work together for an initial period of two months after which Ian will remain with the association on a consultancy basis until the conclusion of SAMW’s annual conference in April, 2018.