Three charities have shared gift support totalling £9,000 from the Scottish Association of Meat Wholesalers, drawing on funds raised during a charity auction at the Association’s 2017 conference and dinner, held in Glasgow.

“It’s always a privilege to be able to distribute the generous contributions made by association members and guests to such deserving causes,” said SAMW president, Frank Clark. “This year’s charities, specially chosen by individual members of our executive committee, are each fulfilling a vital role in their selected fields and we’re delighted to be able to play a small part in assisting them.” 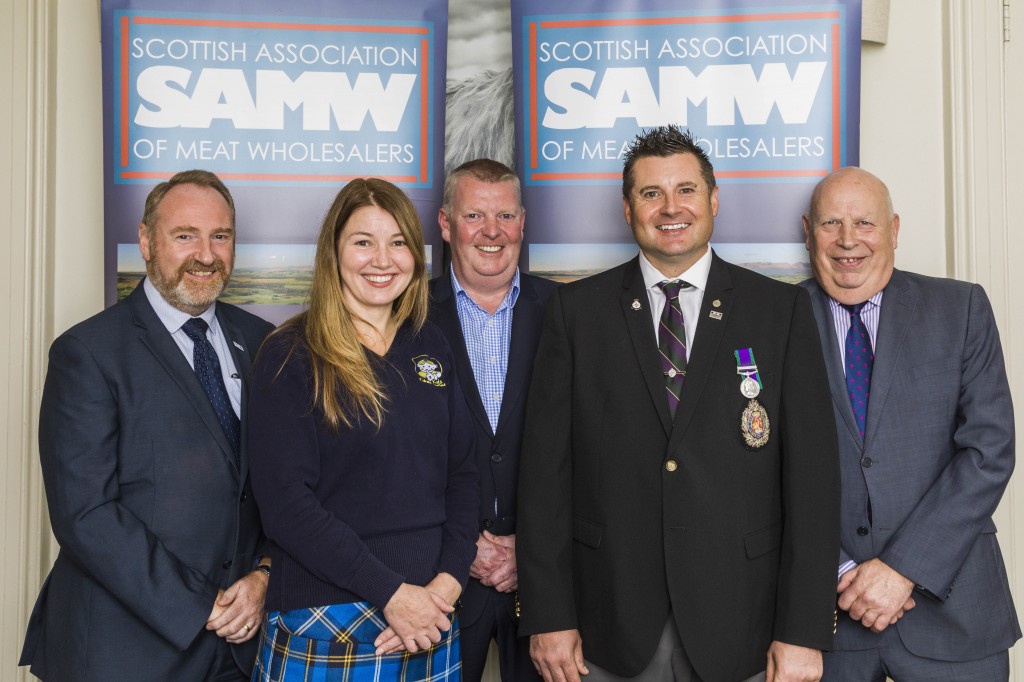 This year’s charities are:

MND Scotland is the only charity in Scotland supporting people affected by Motor Neurone Disease, as well as funding vital research to find a cure.

“Currently just 450 in Scotland suffer from MND, which is good in the sense that the number isn’t higher,” said Craig Stockton, CEO of MND Scotland. “Because the number is small, however, we have to work very hard to promote research into improved treatments and solutions to MND which remains a devastating condition for those who are affected by it.

“The money we’ve received from SAMW, for which we’re very grateful, will go towards helping fund a new physio-therapy service which will help sufferers keep mobile and maintain movement far longer than would otherwise be possible.”

Kidney Kids Scotland was founded in 2000 to help children with renal illness and their families, ensuring those affected are fully supported when they most need it. Families come from all over Scotland.

“Chronic renal failure is a rare condition but when it occurs there is no cure for it,” said Karen MacFarlane of Kidney Kids Scotland. “The treatment route in such cases is either dialysis or a transplant.

“We fund equipment and staff salaries as part of our work but our main commitment is to families and supporting them direct. To do that we rely of gifts such as the one we’ve received from SAMW, for which we’d like to say a huge thank you.”

Combat Stress meets the needs of former servicemen and women, many of whom seek help for mental health issues as they readjust to life after being in the armed forces.

“We are so grateful to the SAMW for this donation of £3,000 to Combat Stress,” said the charity’s Robert Marsh, director, income generation. “Demand for our services continues to grow. Over the past five years we have seen an average of more than 2,000 referrals each year. It is important that we raise awareness and funds for the charity to ensure we can support every veteran that comes to us for help.

“Thank you to SAMW for choosing to support Combat Stress and veterans with mental health problems.”