Scotland’s red meat industry mantra heading into 2018 is ‘livestock, livestock, livestock’ a simple and direct request which has hinted at being met in recent years but remains frustratingly out of reach as the old year comes to an end and a new one begins.

“Just as house buyers are encouraged to think ‘location, location, location’ when considering a new investment, our members see a sustained and reliable upturn in livestock numbers as the number one requirement for the future success of Scotland’s red meat industry,” said Frank Clark, President, Scottish Association of Meat Wholesalers. 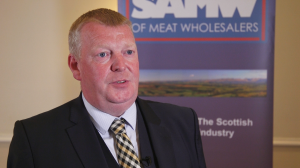 “The fact that an increase in livestock numbers is also our second and third most important 2018 requirement, puts everything else our industry will face next year into its proper context, including Brexit.

“We would obviously welcome a good red meat deal on Brexit, ideally agreed in 2018; alongside a reduction in red tape; a more collaborative approach from the regulatory authorities and a few other things as well. For most of our members, however, the over-whelming need for a stronger supply of Scottish livestock is the issue which overhangs red meat business planning and investment decisions as never before.

“While Brexit continues to dominate the business and political landscape, generating questions over future trading routes, tariffs and market access, it’s the persistent and damaging shortfall in domestic livestock supplies which is actually posing the biggest threat to the future of Scotland’s red meat industry.

“We’ve said all along that with the right settlement deal Brexit could deliver new opportunities for red meat exports from Scotland and this is still our position today.

“The negotiations in London and Brussels continue to progress slowly, but are now starting to yield a few hints of encouragement, not least the agreement reached over the secured status of EU nationals currently working in the UK. This includes many valued employees on which SAMW member companies rely. Our post-Brexit requirement for sustained access to EU workers also needs to be addressed, of course, and we will keep arguing that case. Nevertheless, we do seem to be moving in the right direction on this issue.

“Ultimately, however, our greatest business strength lies in the fact that our end product is as superb as ever with a great global reputation and definite scope for growth. Sadly, securing new markets in the post-Brexit era won’t be possible, irrespective of the agreed exit terms, unless we also have an increased supply of necessary raw materials on which to stamp our renowned Scotch brand. Imagine the frustration for our members if we actually get a good final deal with Brussels and then have nothing to sell on the back of it.

“Turning today’s livestock production decline around is going to take serious government involvement, starting with more political energy being put behind the country’s beef efficiency scheme, alongside a significantly enhanced approach to the introduction and use of additional production incentives.

“Farmers currently have CAP support as part of their income flow, of course, with much being made of what the industry might lose in funding terms after the end of post-Brexit transition.

“While we understand why such warnings are being issued, the challenge from SAMW is for both the UK and Scottish governments to also view March 29, 2019, as their opportunity to do even more to stimulate production. It’s time to start making sure the post-Brexit positives outweigh the negatives.

“We also secured a 9% growth in beef export values, alongside a 4% increase in export volumes, both excellent figures in the midst of a volatile year for the national economy.

“We know we can do more, however, both despite Brexit and because of Brexit. Challenge and opportunity always come together and we’re ready for both. We just need sufficient raw materials to work with and for the government to create a positive structure going forward.”