The need for ‘real money’ to be invested by government in the revival of cattle numbers in Scotland was one of the dominant issues tackled by SAMW president, Andy McGowan, during his address to Association’s annual conference in Glasgow on Saturday, April 27, 2019

“Top priority must be given to restoring livestock numbers to past levels,” the president told members and guests, including Fergus Ewing, the Scottish Government’s Cabinet Secretary for the Rural Economy.

“We’ve been stuck on a downward production spiral for the last 10 years and cannot – must not – allow that to merely kick over into 2020 and beyond. 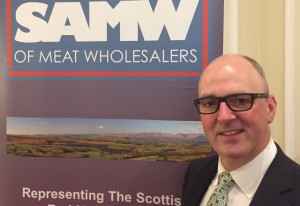 “As someone whose day job is in Scotland’s pig industry, I am encouraged by the 15% growth recorded last year in the country’s pig breeding herd. Much of that growth was due to support from Government that ensured the right processing and marketing structures were put in place to encourage pig farmers to produce better quality stock – and in greater volumes. This was all done with commercial results firmly in our sights, backed by great support from this Government. This deserves our recognition and thanks.

“We desperately need a similar degree of imagination and commitment from government and industry in relation to cattle and sheep production volumes. We’ve had initiatives in the past which have looked promising at the time, such as the Calf Support and Beef Efficiency Schemes, but the reality is that these schemes have proved to be ineffective in reversing Scotland’s falling stock numbers.

“What we need now is for real money to be invested in the revival of cattle production in Scotland and I don’t think we should be ashamed as farmers and processors of asking for a big investment from government to realise our undoubted potential. Investments made now will pay dividends in the years to come.

“A lot is made of the £30 billion industry turnover value set by Scotland Food & Drink as the nation’s target for 2030, but that’s not going to happen without a fair amount of government and commercial investment along the way.

“We need our share of that investment if Scotland’s red meat industry is to play a full part in helping to deliver this lofty ambition.

“Before leaving this point, just a word of support for the Food Processing and Marketing Grants Scheme, which has been well used and appreciated by many SAMW member companies, large and small. I know, of course, that the official line from government is that we’ve seen the last round of awards under this scheme.

“If that’s true, then we will need an even better successor scheme to be developed and launched as soon as possible to enable this sector to continue to invest in processing capacity, equipping us to compete in today’s highly competitive international meat market.”