The lack of a workable and practicable visa scheme, through which to recruit skilled staff from EU countries, coupled with ever rising costs from all directions, has placed Scotland’s red meat sector in an extremely challenging position as we head towards 2022, says the Scottish Association of Meat Wholesalers (SAMW).

While acknowledging that COVID-19 created a massive ‘beyond control’ challenge for the Government in 2021, SAMW says member companies were badly served by Westminster over the past 12 months as regards a range of pertinent issues. 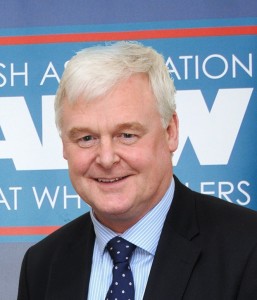 “Maintaining our workforce at a level that keeps the business viable has been the over-whelming concern for my members throughout the year, and, with virtually no real help available from Westminster, businesses have been left on their own to fight a lone battle to find skilled workers,” said Alan McNaughton, SAMW President. “I include the emergency visa arrangements that were put in place in October this year in my criticism. This so-called temporary solution completely missed the point in the first place and hasn’t delivered to any significant degree in the two months since being put in place.

“Member companies desperately need a long-term solution, tailored to address a serious shortage of skilled workers, not a sticking plaster response designed to get us through Christmas and the New Year. Frankly, it didn’t deliver in the short-term and is unlikely to be any better next year. As such, the early months of 2022 will be dominated by continuing labour supply problems, accompanied by rising costs from all quarters.

“The inevitable consequence of a high demand for labour is that wage rates are rising across all industries, energy bills are increasing sharply, our compliance costs continue to climb, while the price we pay for our raw material is rocketing skywards. The cost burden our members endure is rapidly becoming unsustainably high. A market correction is looming which may well mean that an explosion of costs and prices at the retail level will be inevitable at some point in 2022 with processors, wholesalers and retailers being forced to apply cost increases to their end products. Official economic forecasts for the UK are already quoting inflation reaching 5% next year and there is no way the production, processing and retailing of red meat can be exempt from such pressures. It could even be argued, in fact, that food inflation in some primary areas is long overdue in the UK.”

In addition to pressing for a visa solution for recruiting EU workers, which is actually capable of meeting the industry’s needs in 2022, SAMW is also seeking greater understanding and support from Government on a number of other issues.

The Scottish pig sector faced major problems this year, the most damaging of which, aside from its own labour pressures, was the loss of export licences
to China which has caused huge difficulties up and down the supply chain. While the UK’s four pigmeat export plants, including Brechin, are now in the process of having their licences reinstated, there are still significant concerns over the ongoing shortage of butchers, which the new visa system is not easing, and the backlog of supplies on-farm which steadily built up during the peak of the sector’s crisis.

Exporting red meat in general to established customers within the EU has been a massive challenge for smaller, niche product, businesses over the past year. Some operators have given up on trading opportunities which were previously extremely valuable and easy to manage. If Ministers are serious about boosting our export volumes, then a helping hand to provide a low-cost route to Europe and beyond is urgently required.

The campaign to restore Scotland’s BSE status to negligible risk (NR) continues to demand attention. The NR status, on which Scotland led the UK, was lost in October 2018 following a single BSE case in northeast Scotland. This has cost member companies around £90 million in lost revenue to date and needs to be urgently restored. The Association is campaigning for this happen in 2022.

SAMW is also requesting some financial support from the Scottish Government towards extra costs incurred by the mandatory requirement for members to install CCTV cameras in abattoirs, a requirement which cost one medium sized plant approx. £20,000, to quote just one example. Writing to the Cabinet Secretary recently, the Association drew attention to the fact that while mainstream processing businesses have not been awarded a single penny of support to cover their CCTV costs, grants of up to £5,000 were awarded to island plants. In addition, SAMW also highlighted that some farmers have been awarded financial support under the Sustainable Agriculture Grant Scheme to install CCTV in their livestock pens. This needs to be rectified and support made available to all parts of the supply chain that are subject to this new statutory requirement.

Another support imbalance concerns the fact that while red meat processors face full-cost recovery for official controls, as delivered by Food Standards Scotland (FSS), other food sectors, such as fish processing, enjoy the free provision of similar controls.

“Twenty years ago, there were there were over 30 meat plants operating in Scotland,” said Mr McNaughton. “Now we have only 14 plants processing livestock, with many parts of the country being without an abattoir in the local area. While there are different reasons for this shrinkage, the constant burden of compliance costs on our members has been a major contributory factor, especially while our competitor industries in the protein supply market continue to be spared from paying any of these charges. This needs to change in 2022.

“To conclude on a more positive note, however, we are encouraged that the holding of COP26 in Glasgow enabled our Scottish supply chain to showcase the natural, grass-based qualities of Scotland’s red meat production to a global audience. It allowed us to distance ourselves from the intensive feedlot image on which so much negative anti-meat publicity is based. Educating the consumer on our environmentally friendly production systems must continue if we are to ensure our product is marketed to maximum advantage.

“It’s good to be reminded what a great product we have and to be able to remind our customers that beef, lamb and pork from Scotland is produced to such high standards of public health, animal welfare and climate sensitivity, and that these products are a vital part of a healthy balanced diet.”